A History of Eagle Luncheons 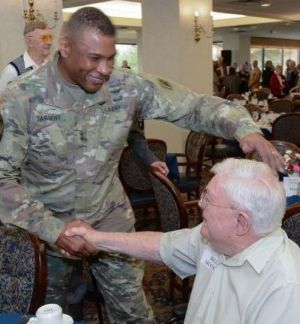 In November 2020 there was a focus group which discussed the question, “After the COVID-19 is gone, what activities do you look forward to most at the Army Residence Community?”  My thoughts went straight to an activity many Residents have mentioned to me in the past ten months:  The Eagle Luncheons, which I have coordinated since September 2015.  They were a popular event on the second Tuesday of the month, with an Auditorium attendance of at least 96. The format was a 45-minute complete luncheon meal, and a 45-minute speaker presentation. The meals at these events were superb.  For example, the last luncheon menu in March before the lockdown was this classic, created by Executive Chef Julian Flores (at right): It began with a Tossed Garden Salad with Raspberry Vinaigrette, an entrée of Lemon Artichoke Roasted Chicken with Horseradish Goat Cheese Sauce, sides of Pesto Mashed Potatoes, Roasted Yellow Squash with Spinach and Pine Nuts, and for dessert, Chocolate Cake with Chocolate Kahlua Syrup, with Coffee, Iced Tea, and Water. This was a complete lunch for an $8 charge to the Residents meal account.  You could not find a better deal, or meal, anywhere.  I would simply call Dining Services and ask that Chef Julian create a lunch for 96 people. The excitement of an Eagle Luncheon in the auditorium was legendary.  I would often ask the speaker to arrive early so we could walk through and test the audio and get a sense of the sight lines. In October 2018, we were honored to have Ambassador Sichan Siv as the guest speaker.  We walked into the auditorium together and double-checked his Power Point at the computer and projector.  It was so matter-of-fact, I thought, “Only at the ARC could something like this be arranged.”
The next hour went by quickly.  It seemed like only a few minutes later Ambassador Siv was telling of his amazing life, from escaping death in Cambodia to becoming an adviser to the President of the United States. The people with amazing stories are not just our visitors, but our Residents and Staff.  Our Dining Services General Manager, Achim Barrow (Right), directed catering at the AT & T Center before moving to the ARC.

The rings below were presented to him, by the San Antonio Spurs, and the Golden State Warriors, for Achim creating their pregame meals during their respective winning championship playoffs.
The Golden State Warriors could have had any chef from the nearby Napa Valley, but they asked Achim to travel from San Antonio to Oakland direct the important ritual of their pregame meals during their champioships. At the Eagle Luncheons, Achim and Executive Chef Julian Flores even personally plate the entrees being served, the same as if we were the NBA champions! San Antonio is not just a vacation destination to take the kids to Sea World.  It’s a thriving metro area of over 2 million people. Bexar County is one of the fastest growing areas in the nation.  It was another testament to our community’s reputation that Bexar County Sheriff Javier Salazar was our January 2020 luncheon speaker. At left is Sheriff Salazar with Sandra Edsall, on the cover of the January 2020 issue of The Eagle.  The attendance at this luncheon set a record, at over 200! There have been several significant reunions at the Eagle Luncheons.  In June 2018, retired Major General Pat Brady, a Medal of Honor recipient as a dustoff pilot in Vietnam, met resident retired Colonel Al Flory, a fellow pilot serving the same time, 50 years ago, in the same unit.

The Main Dining Room, with a seating capacity of over 200, has been the venue for the Eagle Luncheon twice.  Besides the January 2020 event with Sheriff Salazar, our speaker in March 2019 was MG Patrick Sargent, then the Commander, U.S. Army Medical Department Center and School. MG Sargent arrived early to individually meet the 200 residents attending the luncheon.  His meeting with WWII veteran, Army nurse LTC Johanna Butt, is The Eagle’s April 2020 cover. The Main Dining Room is more suited to a “walkabout style,” which MG Sargent demonstrated perfectly  During his presentation and extended Question and Answer session. In four and a half years, speakers have included a Space Shuttle astronaut, a Presidentially-appointed Commissioner to the World War I Centennial, several researchers from the renowned Barshop Institute for Longevity and Aging Studies, a distinguished World War II historian, and residents who have shared extraordinary memories.
I look forward to Eagle Luncheons returning, and so do many Residents. --- Kevin Scott